The levels discussed here are probably irrelevant to any practical application.

This is a silly topic, but there’s a slight chance it might help someone troubleshoot something, someday. 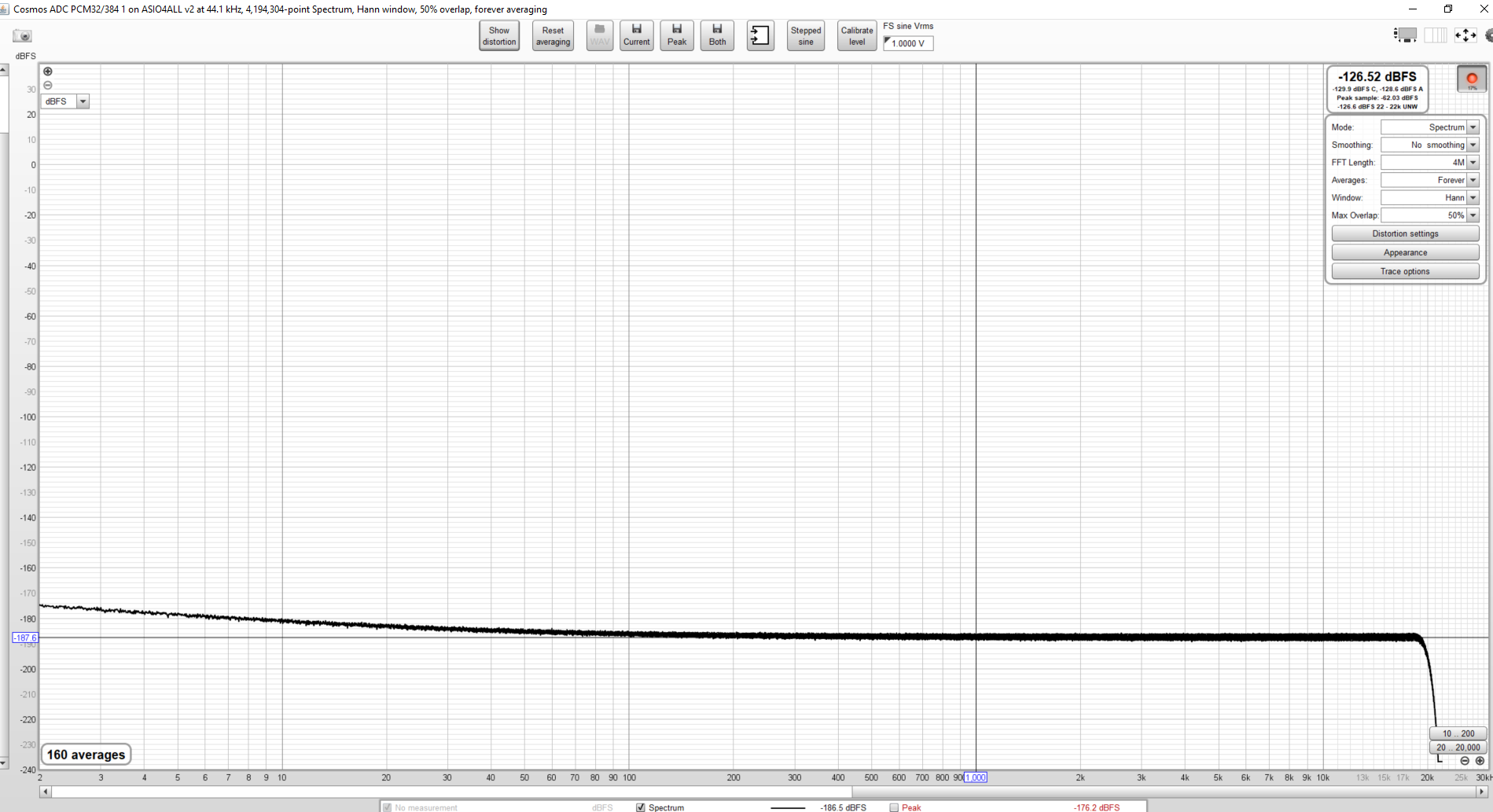 Here is an FFT of an A-grade E1DA Cosmos ADC with nothing plugged in. The settings are unreasonable; 160 averages of 4M Length: about 2 hours of data collection. This was taken with input set to 1.7V, mono mode (summing both channels).

Almost perfect white noise spectrum, with only a bit of low frequency rise. The chart starts at 2Hz so performance is better than it looks at first glance. With these settings the white noise is -187dBFS at 1kHz.

The mains noise is a barely visible -184dBFS blip at 60Hz; not remotely measurable in any reasonable test suite. This is plugged into the front USB port on a desktop PC, and with the input impedance set to 640Ω. 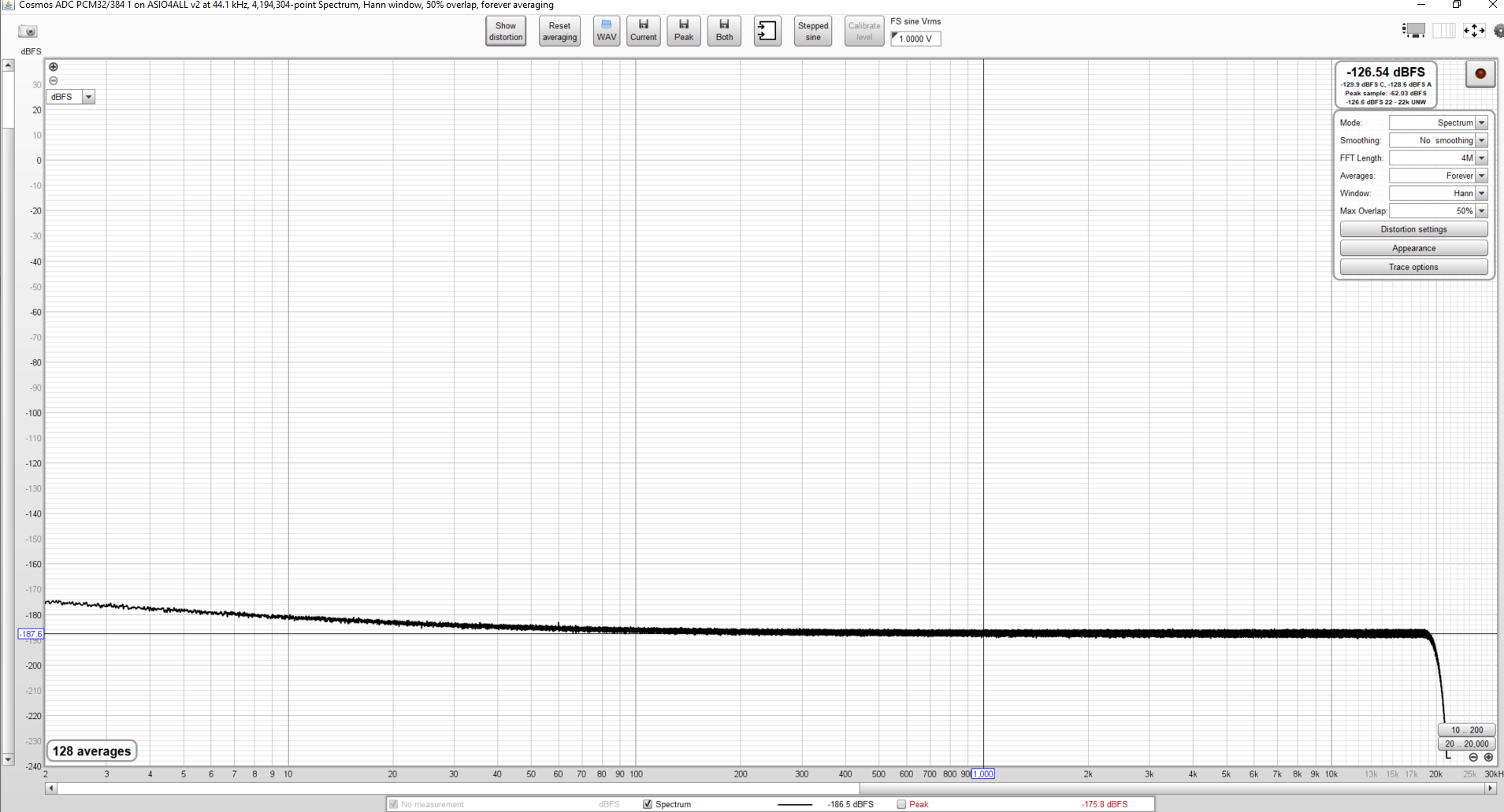 Mains noise increases slightly to -182dBFS when the input is set to 10V (3.84kΩ input impedance). 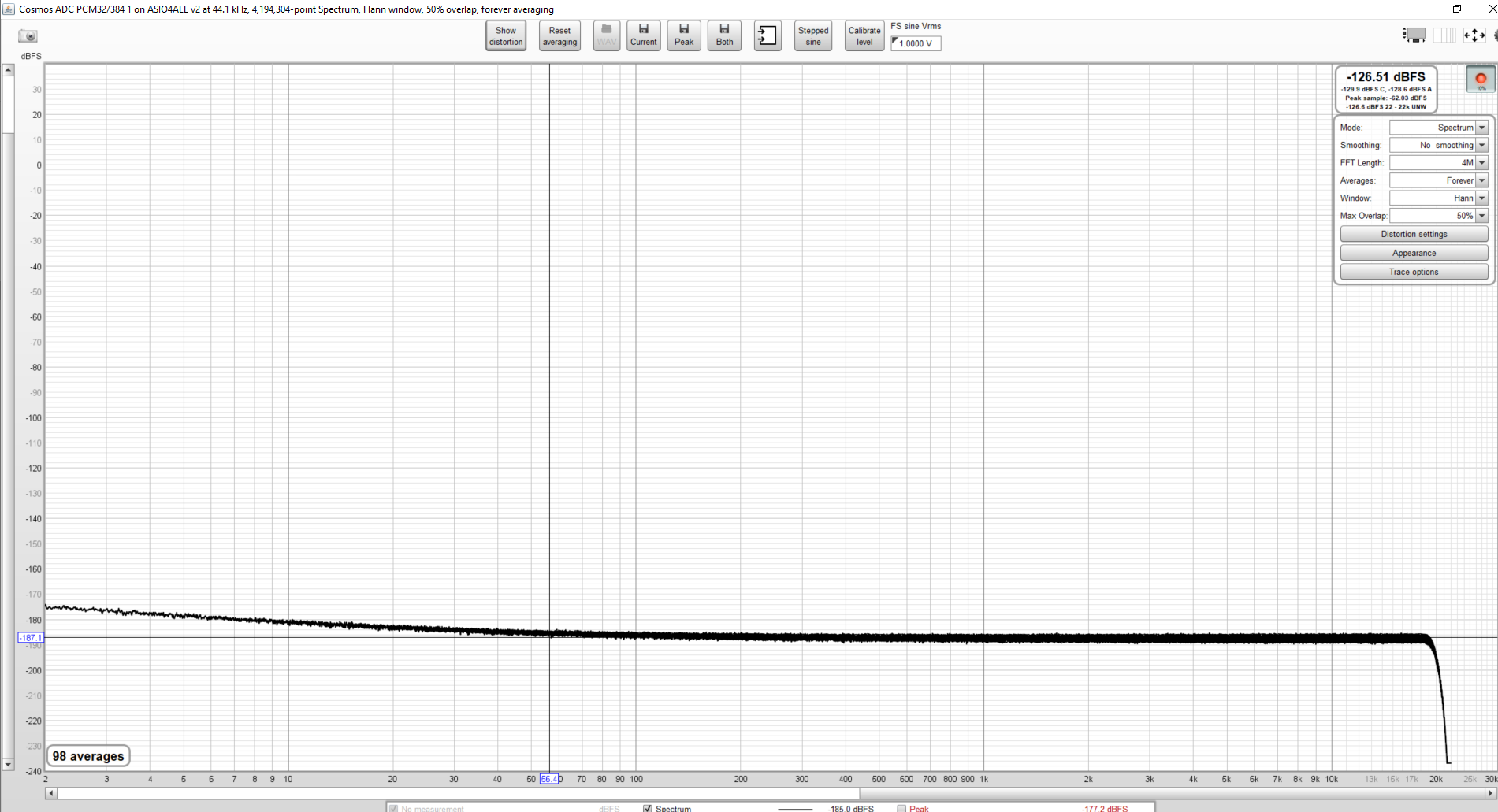 “Shorting” the input makes the mains noise disappear but otherwise has no significant effect on the noise level. This was taken using a 10.4Ω balanced dummy load to ground, on the 10V input setting. If I had to guess, it looks like the mains noise is dominated by bias/leakage current over the input resistor. Levels this low indicates that the OPA2156’s more robust input specs (aside from noise) compared to the OPA1612 wouldn’t have any practical advantage as the input in this scenario. 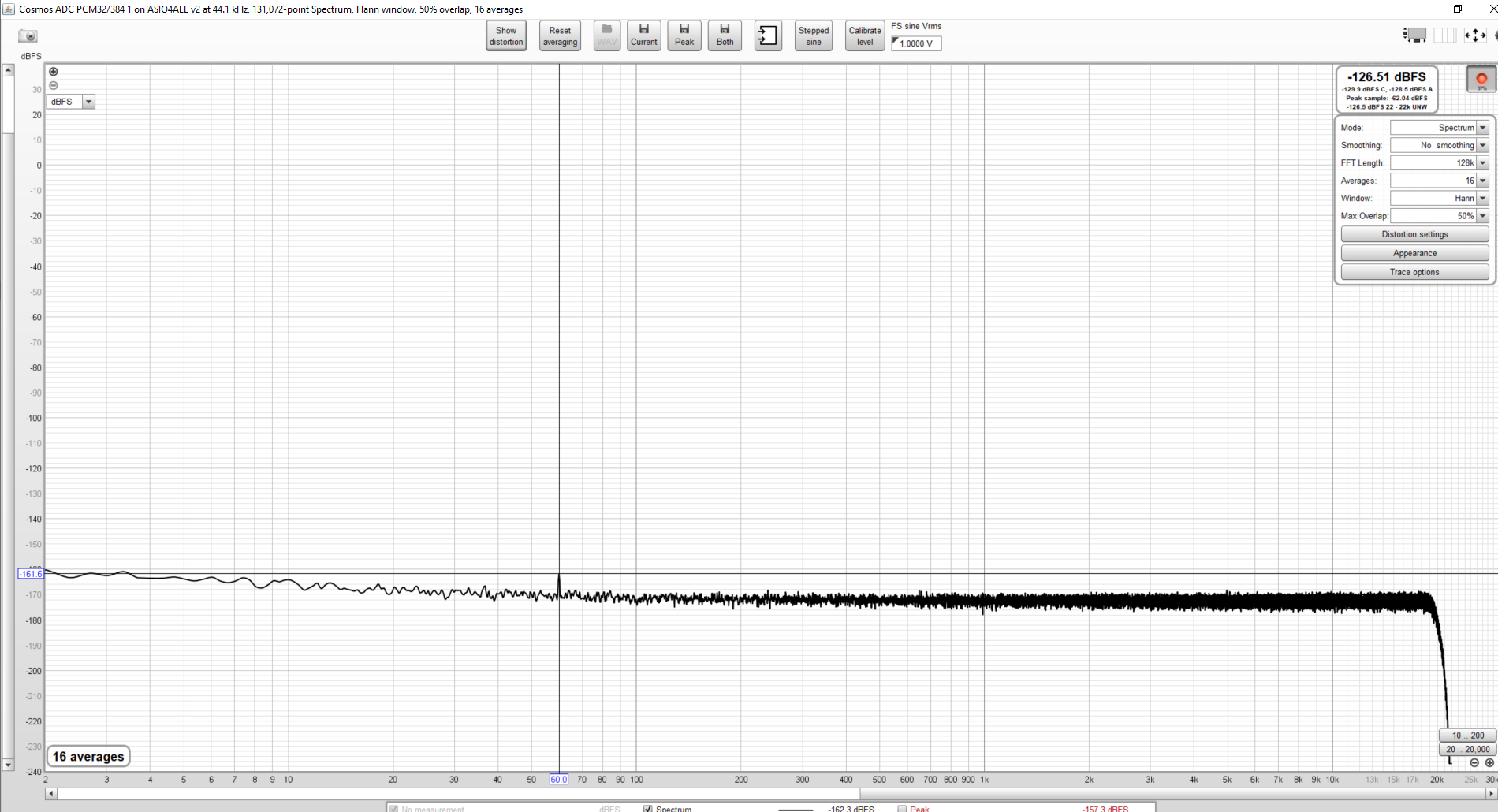 Now with a 30cm XLR Y-splitter cable plugged in. This type of cable is normally required to take measurements in summing mode. The cable itself was left dangling in midair to prevent it from touching anything. A much lower FFT length and averaging was used for this test, so the broadband noise level is not comparable to the tests above. Mains noise has jumped to -161dBFS. This goes away when the input pins are shorted (and as a result is likely not present in actual measurements).

This may look significant compared to the charts above, but this level of mains noise probably isn’t relevant. It is much more pronounced than before, but has practically no effect on the overall noise (still orders of magnitude below the RMS white noise level, which has remained unchanged). APx555 charts typically set the Y-minimum at -160dBr, so this level of noise wouldn’t even be visible on those graphs. 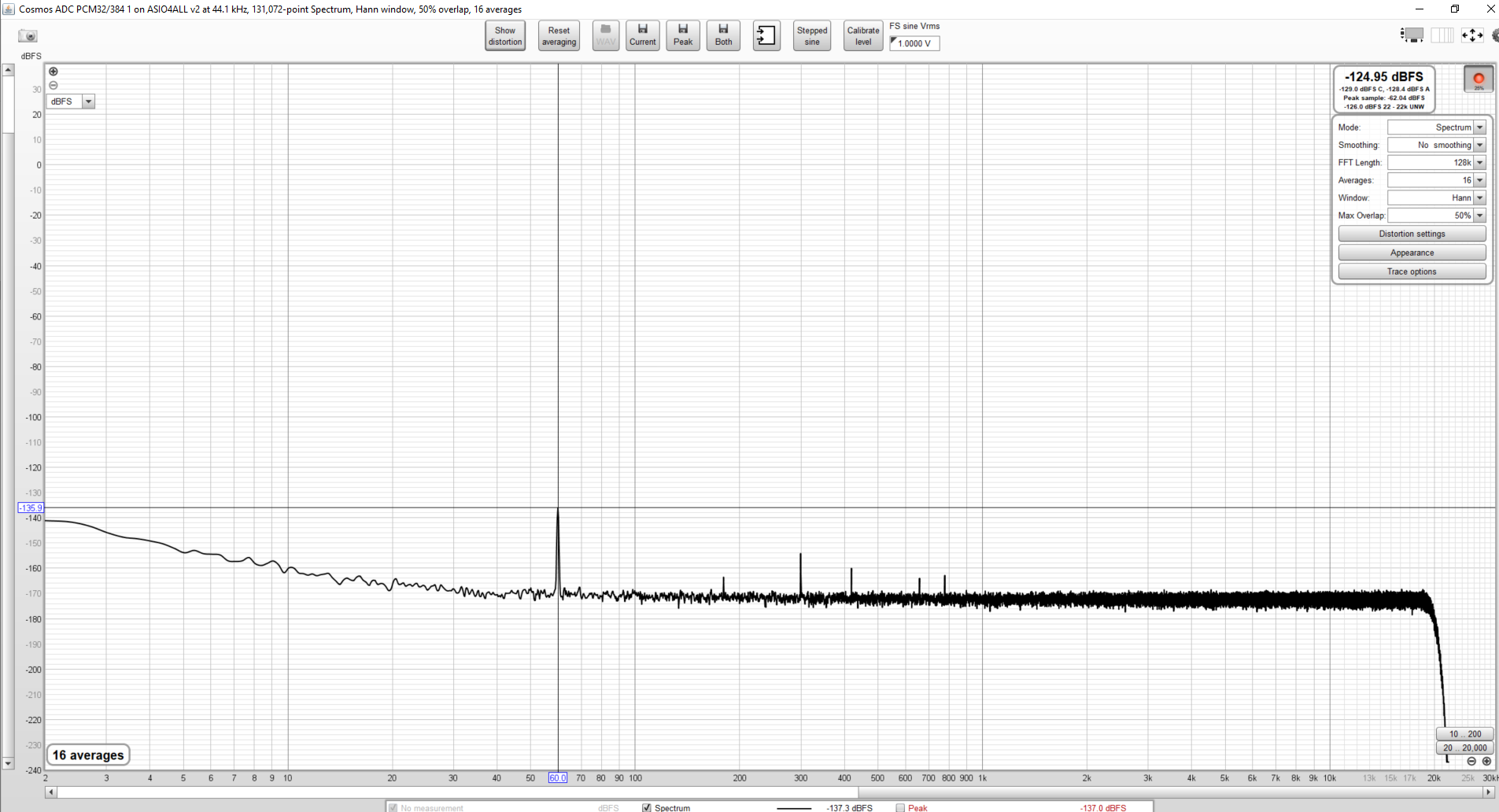 This measurement is with a unibody metal XLR to 1/4″ TS adapter plugged in. This adapter shorts XLR pins 1 and 3 to the connector shell. Despite being much smaller than the Y-splitter cable, it has significantly higher mains noise, enough to reduce the overall noise performance by 1.5dB.

It also introduces a new spray of spuriae previously unseen on any graphs, which all appear to be odd-order harmonics of the mains fundamental. 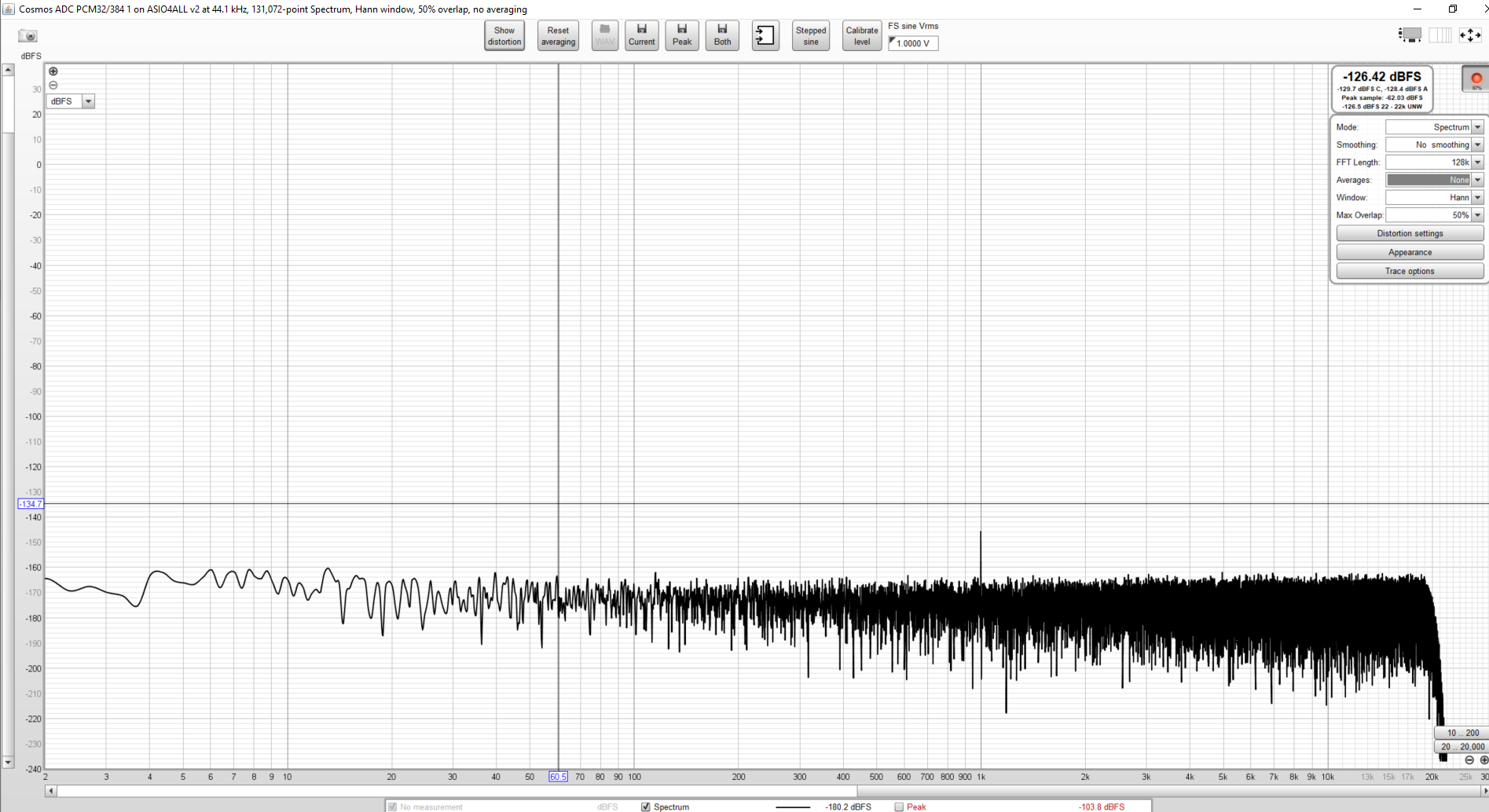 Connecting a function generator, 1Vpp 1kHz, across XLR pin 1 and the connector shell, produces the above. Note that the FFT length and averaging are different, so the broadband noise levels are not comparable to the other tests. I didn’t verify whether the function generator actually output 1Vpp (doubtful since the load impedance was almost zero). Measuring pin 1 and the connector shell directly at the ADC (nothing plugged in) show that they are shorted together (or at the very least have a low resistance between them); likely they are both attached to ground. In other words, injecting a signal between the two ground inputs, presumably between the chassis and signal grounds, produces something measurable; the two grounds are not connected at the input.

Shorting the two grounds together doesn’t seem to measure any different from an open circuit (not pictured). Perhaps this changes when connected to an actual input with actual current (not tested).

A-weighted noise is -128.6dBFS, matching the specs for an A-grade unit. I get the same value with the input set to 10V or 1.7V. At the 1.7V setting this corresponds to noise below 1µVrms. The noise floor being below -126dBFS at all input levels rivals the APx555. Unlike the APx555, the Cosmos cannot autorange, so for measurements like sweeps the APx555 still has superior performance.

The APx555 also has a more robust frontend, and the Cosmos ADC’s low input impedance is another limiting factor. On modern DACs using OPA1612 filters/output stages this shouldn’t be as much of an issue though, as those parts can comfortably power 600Ω loads with minimal distortion.

-186dB is below 1nV; the flat noise spectrum of the Cosmos ADC means that picovolt level signals can potentially be measured at any audio frequency with sufficient FFT lengths, provided they are narrow enough bandwidth (4M FFT length means ~0.01Hz bins).

Each of these tests took hours to run, and saw no noticeable degradation in noise performance over time. I would imagine that distortion performance would improve as the ADC temperature approached steady state, but have no way of confirming that without a higher quality sine source.