One of the most common questions on PC forums is whether a motherboard is capable of powering <X impedance> or <insert headphone here>.

Normally someone will eventually bring up that sensitivity is also important. But is the original rule of thumb – that low impedance headphones are easier to drive – actually true in practice for motherboards?

To test the rule of thumb that higher impedance headphones are hard to drive, I plotted headphones on a Loudness vs. Impedance graph to see if a correlation between the two existed. For the purposes of this experiment, I calculated loudness using a model of a typical high-end consumer motherboard, an ALC1220 with 75Ω output impedance. Motherboards usually have a ~75Ω output impedance.[1][2][3][4][5] Although different chips will produce different loudness results, the same trends should remain true for any Realtek codec, since their only relevant effect on loudness in this scenario is maximum voltage swing.

You can calculate the loudness of your headphones with your motherboard using this calculator.

I chose AudioScienceReview’s headphone measurements as a starting point for this research, since it reports its own sensitivity and impedance measurements (I did not want to go looking up specs for every single headphone listed, and also wanted the numbers to be standardized to a single test rig). I also figured that its dataset would be applicable to the sorts of headphones that a modern headphone buyer would be considering (unlike, say, Innerfidelity, which is high quality but has a more esoteric headphone selection).

There is no significant correlation between impedance and loudness for a headphone driven from a typical motherboard, at least with this dataset. If anything there is a very weak trend suggesting that higher impedance headphones are easier to drive.

Perhaps the sample size on AudioScienceReview is too small. Here is the same exercise repeated with Reference Audio Analyzer’s tested open and semi-open headphones (closed headphones were omitted because their measurements included active headphones), with 191 measurements in total.

Expanding to a larger dataset doesn’t suggest that high impedance headphones are harder to drive.

Some might argue that the rule of thumb has an exception: planars. I would argue that it isn’t a very good rule of thumb if it isn’t applicable half the time. Still, though, does a general rule that high impedance dynamic headphones are harder to drive hold true?

With the dynamic headphones tested on ASR, not really. Though the direction of the trendline has reversed, the correlation between impedance and loudness is still too weak to suggest any general rule; the R2 is about the same as it was before. And even if the correlation were strong, the expected difference between a 32Ω and 300Ω headphone would be only 2dB.

The same was repeated with the conventional dynamic AKG, Audio Technica, Beyerdynamic, and Sennheiser headphones on RAA. I sanitized this dataset manually somewhat (removing variations and the K1000; consider this a possible source of bias). Once again the correlation is weak.

A Better Rule of Thumb

Just use efficiency and ignore impedance. 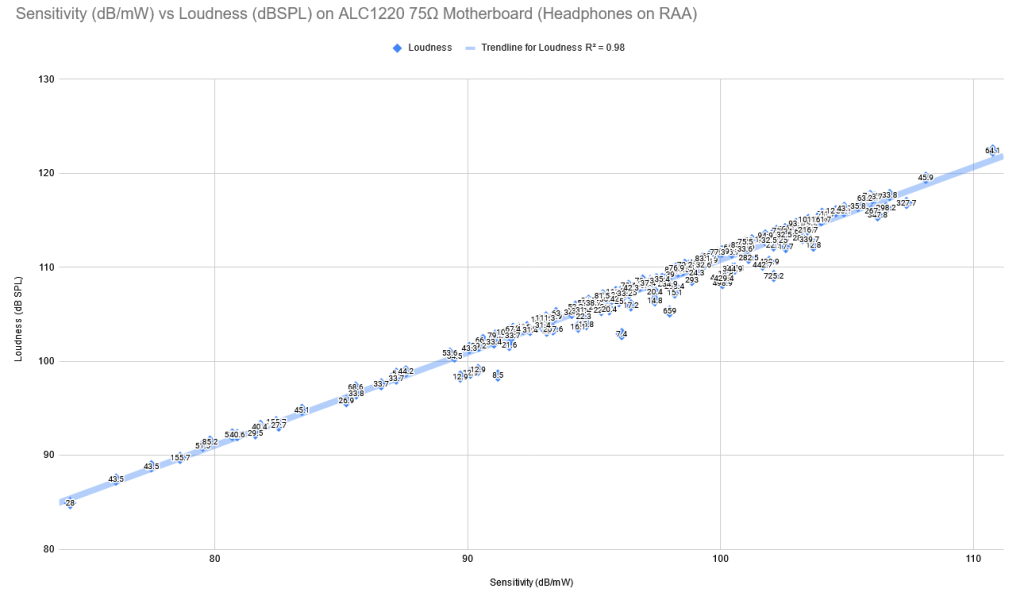 There is a strong correlation between headphone efficiency and loudness, even without correcting for impedance (impedance numbers are displayed for each headphone plotted). Headphones with particularly high or low impedances deviate from the trendline somewhat, but not by much. It’s certainly much better than relying on impedance, which has little to no correlation with loudness on its own.

Overall, the rule that high impedance headphones are harder to drive is not generally true in practice. Instead sensitivity/efficiency should be treated as the main indicator of how difficult a headphone is to drive, even in the absence of impedance information.